Celebrating the Bruce Trail in the Valley

It was 50 years ago now that the idea of the Bruce Trail was hatched, and a group of people in the Beaver Valley first got together to try and make this section of it a reality.  The 50th Anniversary Celebration is coming up, so I'm going to make my little contribution here this week, telling you about four of my own personal favourite trail walks. 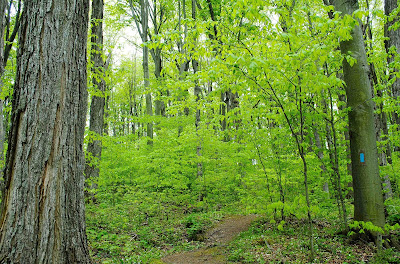 For me, the Bruce Trail means a walk in the woods.  There are many sections of trail that wander near the edge of the Niagara Escarpment, through beautiful forest.  There's wildlife, ferns, trees, wildflowers, and a sense of peace I get from a walk in the woods.  The trail also goes through farm fields, along the cliff edge, through meadows, and sometimes just along roads, but the woods, especially in spring, represents the trail for me. 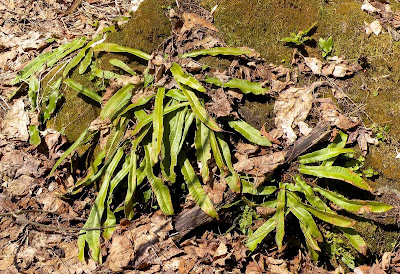 Just one of many rare plants along the escarpment, the Hart's Tongue Fern - here the left-over evergreen fronds from last year that lasted under the snow - is a symbol of the trail for many.  The original idea was to follow the Niagara Escarpment in Ontario, and this fern only grows in the limestone rock along the escarpment, just one of many special features of the trail. 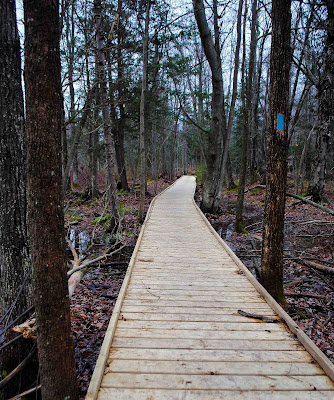 What amazes me most now that I live close-by and volunteer for the trail myself, is the number of retiree volunteers who keep the trail available for all to hike.  The Beaver Valley Bruce Trail Club, which cares for the section in this area (one club of nine in the Bruce Trail Conservancy), is run entirely by volunteers, and an amazing 30% or so of the members actively volunteer as Trail Captains, Land Stewards, Organizers, or Hike Leaders.  I'm sure another 30% have volunteers in the past.  It is really the efforts of these people (150 or so at the moment), who we are celebrating in the 50th Anniversary.  This boardwalk was built by volunteers two years ago. 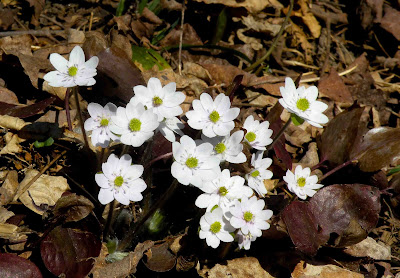 The wildlife and wildflowers along the trail never cease to amaze me.  This is hepatica, one of our earliest spring wildflowers.  For me, when I see the beauty in the woods along the trail, I always think of the private landowners who make the trail possible.  Hundreds of landowners have allowed the trail to cross their land based on handshake agreements, and this is the fundamental reason the trail exists. Thanks for sharing the beauty. 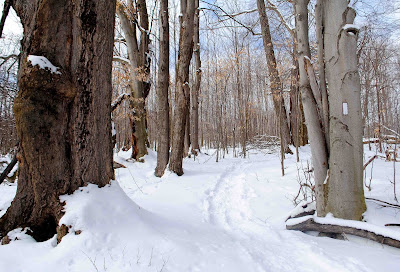 The trail is great in the winter too.  We get lots of snow (usually), and snowshoeing is increasingly popular.  The local club runs regular hikes all year-round, including winter ones on snowshoes.  The white blazes as on this old beech tree mark the trail for all hikers (blue blazes for side trails).

I knew several of the people who originally came up with the idea for the trail in the early 1960s, and went on my first Bruce Trail hike about 1964.  It's nice to know that an idea originally developed and put in place by volunteers has flourished so well. 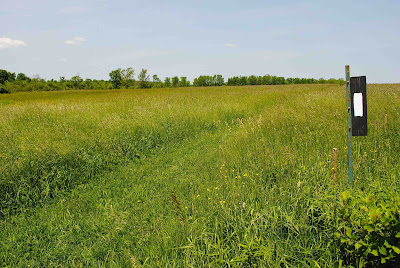 Parts of the trail go through farmland, like this path through a hayfield, and the Bruce Trail Conservancy actively raises funds to purchase land corridors where it can, to provide a permanent route.  Farm fields are leased back to farmers, as in this case.  Hayfields provide excellent habitat for bobolinks, now a threatened species in Ontario; the Bruce Trail Conservancy supports conservation objective as well as hiking. 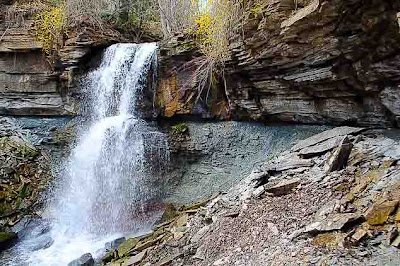 This is Webwood Falls, on a property recently donated to the Bruce Trail.  Landowners increasingly look to the trail when thinking of selling their land, and a surprising number donate land.

Let me add a few caveats before I present my four favourite walks over the next four days.  Note I said 'walks'.  I'm not a 'hiker', I'm a 'walker'.  I go slow, I look around, I always have my camera, and I like to stop and enjoy the moment.  I get tired going up hill.  So the four walks I've chosen are all short, relatively easy and scenic; many Bruce Trail hikers would have others, likely over longer stretches of the trail, as their own favourites.


The Bruce Trail is an important part of our world here in the Beaver Valley;
link here for other places round the world: