I think my favourite walk on the nearby Bruce Trail is a section that runs from Graham's Hill Sideroad north and downhill to reach Grey Rd. 30 on Bowle's Hill.  This section has a variety of habitats, a major sinkhole, some huge old trees, a unique double waterfall, and a deep ravine carved by a tumbling stream.  It's only a little over 2 km long, and downhill, the perfect walk for me. 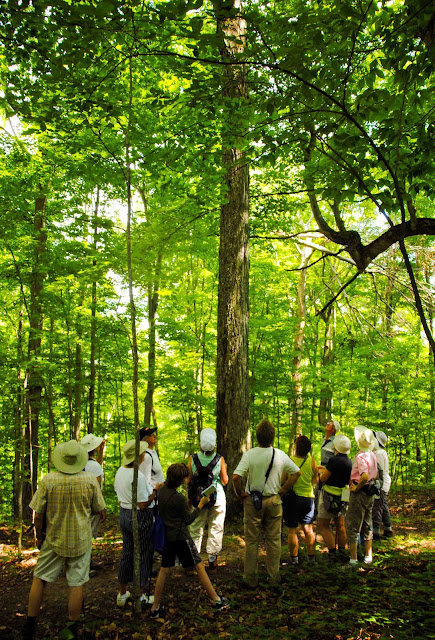 The highlight of this section for me is about an acre of true old maple-beech forest, with some ancient sugar maple and American beech.  These are forest-grown trees, so they're not huge in diameter, but they are tall and straight, and what I would call 'old growth'.  In fact, I've hardly ever seen a stand of trees of this quality anywhere else in southern Ontario.  This is a group of Bruce Trail walkers admiring one of the trees. 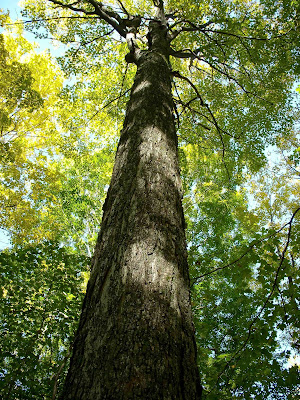 And this is the Sugar Maple they're admiring, at least 60 feet to the first branch and 2 feet in diameter.  Even a single tree like this would be a unique feature along the trail. 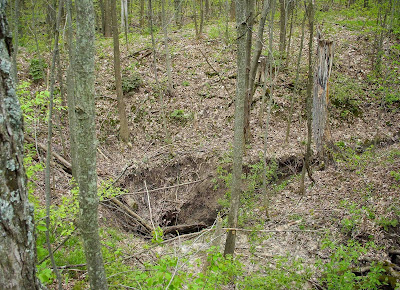 This is the largest sinkhole along the trail, about 20-30 feet deep and 60 feet across, potentially quite dangerous to descend into, but representative of the widespread karst features in this area which is all limestone bedrock.  There are 8 or 10 on this property, all dry sinkholes.  (Elsewhere near here are sinkholes with disappearing streams which reappear below the escarpment as springs - but that's a story for another time). 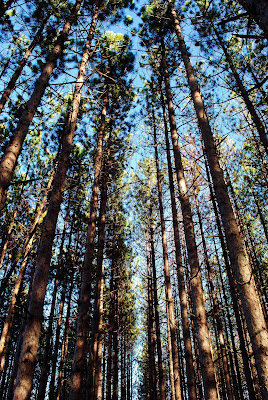 Part of the initial stretch of trail here goes through a pine plantation, which as you can see by the picture above, badly needed thinning.  The trees were too tall, too thin, and too crowded, so last year we organized an assessment by a forester, and had the thinning done in March.  This is part of the pile of logs that resulted. 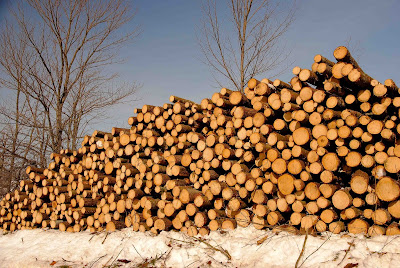 There wasn't much profit, but it was enough to pay for all the work that got done, and in the future we'll have a much more ecologically diverse forest as a result.  Tomorrow I'm going out to take photographs for the baseline monitoring to follow up on the thinning operation. 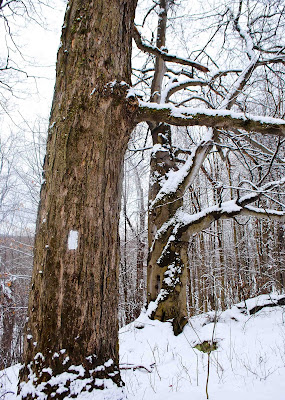 You can snowshoe the first portion of the trail through here, though in deep snow the trail down in the ravine would be almost impossible.  Winter trail use is increasing all along the Bruce Trail with the advent of the smaller aluminum snowshoes that everyone has now.  I've been on winter walks where no-one had actually seen anyone use the 'real' snowshoes - though I have 3 of them, in different sizes for different snow conditions. 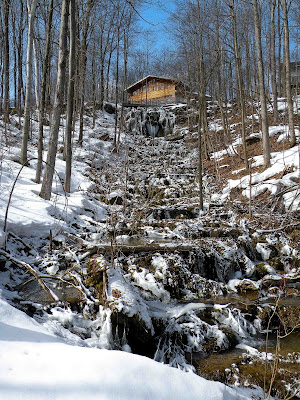 As you hike north, you head downhill a little, hear the running water, and suddenly come upon this unique tumbling waterfall.  The geology of the area determines the structure of the waterfall, with a vertical cliff at the top followed by this long step-like eroded channel down the slope, to another vertical drop below, followed by the tumbling stream in the ravine.  The unique ski chalet at the top sits on top of the stream - though it wouldn't be allowed under today's planning rules. 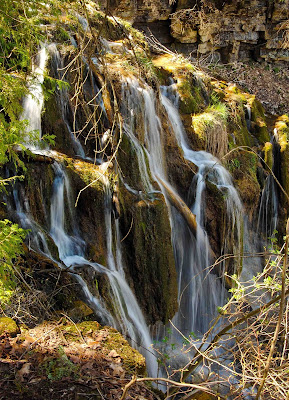 This is the lower falls, hard to get a picture of behind the trees except in winter or early spring. And following this the small stream tumbles down a steeply-sloped ravine carved in the Queenston Shale that accounts for so many of the steep slopes of the valley.  There are two stepping stone crossings of the stream - this one now replaced by a brand new bridge, built by another team of volunteers three weeks ago.

We've only gone about 2 km of 900 in the overall Bruce Trail, but it's a very interesting 2 km.  Tomorrow we move south to another section with another waterfall.  No wonder this section of the trail is informally known as the 'Falling Water Trail'.
Posted by The Furry Gnome at 8:57 PM