Well, I know it isn't quite spring when we wake up to 20 below temperatures, but the sun today was definitely moving toward spring, higher in the sky, brighter, and warmer than those cold January days. The season has turned a corner; it will be maple syrup season before you know it - the surest sign of early spring. 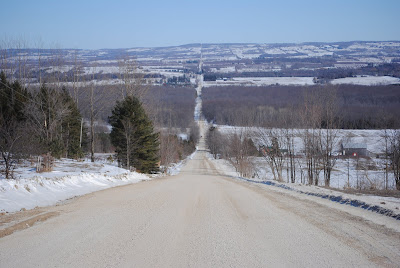 So I took a drive to explore the north-east corner of the Beaver Valley, toward the backside of the Blue Mountains, a rolling gentler landscape than the narrow upper valley. Here long rounded slopes fold in on each other forming the valleys of Mill Creek and Indian Brook. The Epping Sideroad in this photo is headed straight east; over the top of the farthest hills are the ski runs of Blue Mountain. 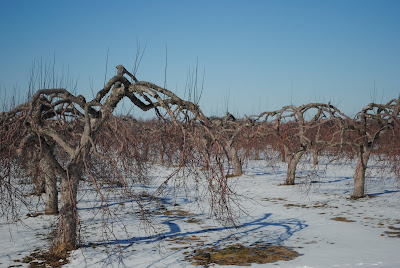 Partly, this is a country of apple orchards, hundreds of acres of them, the apple trees heavily pruned for ease of picking. This is a favourite area for growing apples because of the ameliorating effect of Georgian Bay and the long escarpment slopes on the local climate. Georgian Bay is cooler in the spring, and delays apple blossoming, thus reducing the risk of early spring frost damage, while the long slopes lead to cold air drainage, reducing the risk of cold night frost damage. 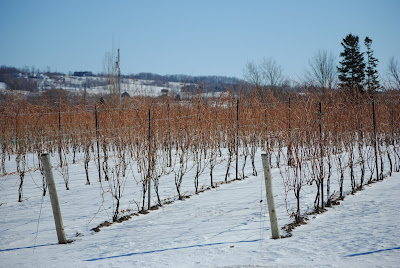 One brave owner has opened a small winery, and is even trying out grapes in on the slopes! 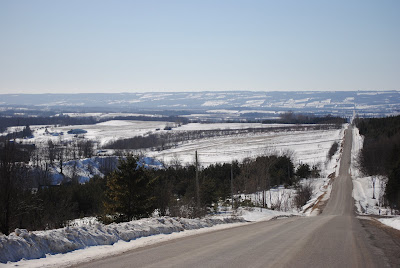 Driving east, you gradually rise up toward the back of the Blue Mountain slopes, a series of large but gentle hills in contrast to the steeper slopes lining the west side of the valley - here seen in the distance looking back to the west. 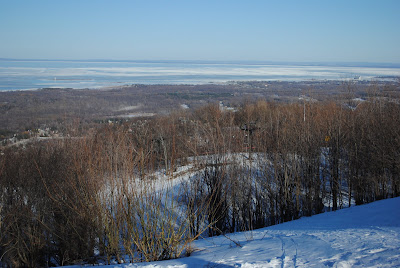 Finally you get to the back of Blue Mountain, on Swiss Meadows Drive, just behind the chairlifts unloading hundreds of snowboarding teenagers. Here you look east over the town of Collingwood, the old grain elevators on the far right hand side of this photo, the lighthouse on the left hand side. And in the distance, the far side of the bay, curving north toward Christian Island.
Posted by The Furry Gnome at 9:15 PM