The first view of the Beaver Valley seen by many visitors is the one you get driving north out of Eugenia and coming over the hill of the Niagara Escarpment on Co. Rd. 13. Stretching ahead of you, the road goes steadily down into the village of Kimberly, through the village, past the two ski clubs (out of sight on the left), and up the opposite hill, until it disappears beyond Epping - a 10 km view, increasingly a view of forest rather than farm fields. 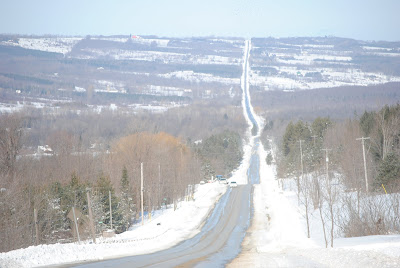 The upper end of the valley is the narrow part, a classic U-shaped glacial valley, rimmed with the steep hills of the Escarpment, and vertical bedrock cliffs, especially on the east side. Among these, Old Baldy is the largest and most obvious cliff (centre of the picture), a popular viewpoint with a spectacular view! 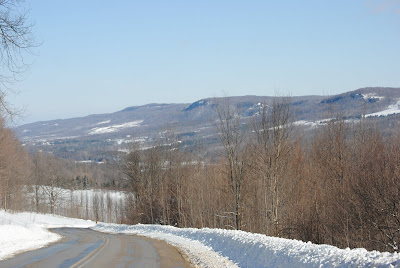 Off to the left on the west slopes where the snow will last a little longer in the spring, the ski clubs pattern the hill with their many ski runs, bringing more traffic in the winter than during the summer. So far it's been a good year for skiing, but with 9 degrees and rain forecast later this week, who knows if there will still be skiing during March Break this year? 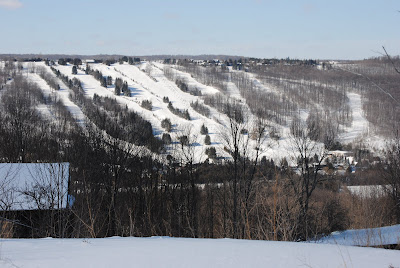 Beyond Kimberly the valley slowly starts to widen out until it opens to a gentler view as you pass Heathcote and drive toward Clarksburg and Thornbury and the many apple orchards. Here the abrupt cliffs of the Escarpment are left behind, and the valley is wide and rolling. The Beaver River wanders downstream through the wide valley to Georgian Bay at the Thornbury Harbour. It's joined by a number of tributaries, the largest of which is Mill Creek, and brings hundreds of fishermen to town later in the year. 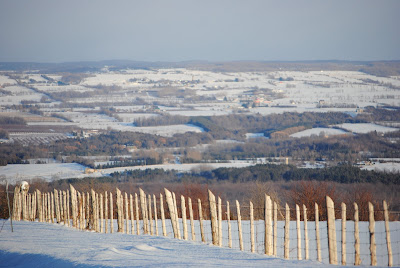