Well, it still doesn't feel like winter ever actually got here for good, because the temperature keeps rising above freezing and we get rain, though it is white out, and we do have enough snow to feel somewhat like it's winter. But we're moving fast toward spring now, and today I saw two small flocks of redpolls - small sparrow-like birds with bright red caps and black chin bibs. 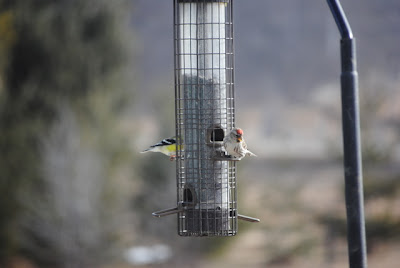 It turns out I saw these about the same time last year, and got these pictures. They're a migrating flock that's likely just passing through on their slow way north again - they breed in the boreal forest. At first I thought they were just the dull, winter-coloured goldfinch with which they were inter-mingled, but a closer look showed the red caps and sometimes a pinkish breast below the black bib. They were on the road, eating grit. 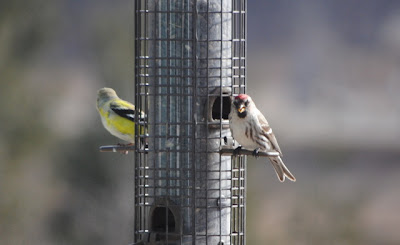 At the same time, the days are distinctly longer, with sunrise not long after 7 now, whereas it was after 8 briefly over Christmas. And at the end of the day, it's still light out past 6, while it was dark by 5 six weeks ago.
Posted by The Furry Gnome at 8:45 PM