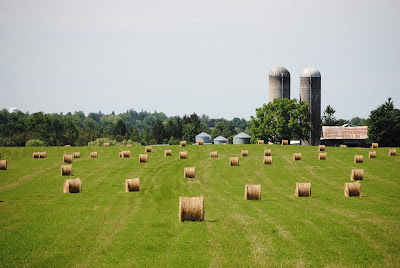 Perhaps the biggest single visual component of the rural landscape around here, at least where the farmland is good, is the variety of farm fields and their crops. It's haying season; in fact haying season is nearly over, though farmers are still out cutting hay, raking it to dry in the sun, and then baling it, mostly in the big round bales that have removed one of the heavy former jobs on a farm - manhandling those old square haybales onto the wagon. 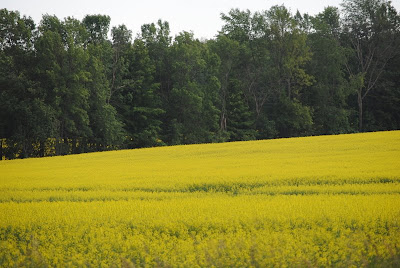 While haying season is nearing an end, the canola is just coming into bloom, throwing an almost fluorescent yellow across a few fields in this area. There is more of it, and larger fields, further south. 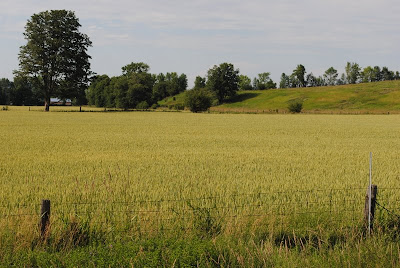 And the wheat fields, most of them winter wheat that was planted last fall, are just showing the first touch of that golden colour that will lead to their harvest. It's amazing to me that more people don't connect the golden fields of wheat ready for harvest with the bread in their kitchen! The first wheat harvests will probably be underway before the end of the month. 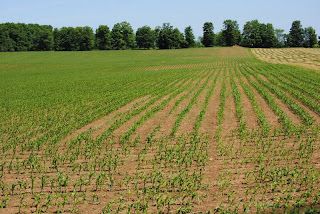 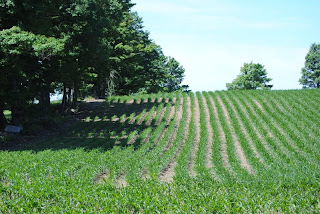 Corn crops will mature later into the fall, and they illustrate the huge variability of crops on farms. Rainfall at the wrong time, soil conditions and other variables the farmer juggles can mean a huge difference in crop growth. These two photos were taken the same day; the corn in the left photo is just about 6 inches tall, and hardly beginning to grow; the corn in the right hand photo was a good 18 inches tall, and growing fast.

While well over 50% of the farm fields around here are in hay, and some more are in pasture, canola, wheat and corn account for about 90% of the other field crops grown. And together, they represent one of the most obvious indicators of the changing seasons, in a region that is still largely a farm landscape.
Posted by The Furry Gnome at 8:45 PM