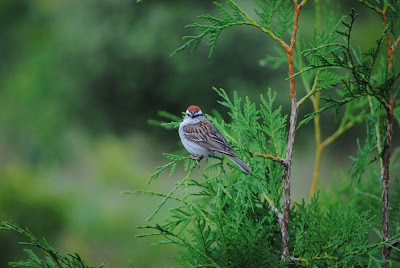 I am NOT a bird photographer, so it’s only good luck if I ever catch a picture of a bird sitting closely enough that it’s worthwhile. This chipping sparrow stayed in the cedar just off our deck, cheeping steadily, because our cat was out on its leash, and the sparrow’s nest was nearby. I’m glad to say the cat stayed on its leash, and didn’t get the birds!

But we have become much more aware of the birds around the cabin and the neighbourhood this summer, seeing and hearing them often enough that we are getting to know them by their songs quite well, and we frequently see them nearby, so much so that I always have my binoculars close at hand.

Herewith is a short list of the birds we regularly see at home or in the immediate neighbourhood, and whose songs we have learned to recognize:

The common chipping sparrows are the closest, right around the house. Tiny little sparrows with a rusty cap and a plain breast, they sing their steady trill which is easy to recognize, or they squeak from the bushes as they hop around seeking food.

Red-wing blackbirds nest in the meadow, and throw their piercing calls from the top of a pine tree. Their family is now off the nest, but until recently they made a enormous fuss if you walked down the path near their nest, hovering in the air above your head, ready to attack.

Chickadees seem to always be present hopping among the branches of the apple tree, looking for food in the nooks and crannies of the bark. They’re one of the few that will stay for the winter, and I saw one feeding a younger bird that looked the same size to me.

And this summer we’ve had a wren, a very small brown bird, but with one of the nicest bird songs you’ll ever hear. It warbles loudly from trees, shrubs, even the railing of the deck. There’s also a song sparrow around sometimes, and we frequently hear the descending trill of the field sparrow. Its song speeds up toward the end, as if you dropped a ping pong ball on a table.

There is a family of kingbirds, a swallow-like bird that can hover like a helicopter while it catches insects. There are always goldfinch, one of the few birds that sings while it’s flying, bouncing across the sky, its cheerful song almost always echoing nearby.

For a few days I saw a brilliant blue indigo bunting, one of the most beautiful of our birds, singing its regular six-note song from several different trees. Almost every evening a couple of cedar waxwings come and sit for awhile in the tall dead elm 200 feet from the deck.

We’ve had bluebirds around all summer, perhaps our favourite bird, and there’s been a family of orioles, with their brilliant black and orange colour. I did manage a very distant, slightly blurry picture of a bluebird – enough to prove that’s what it was! 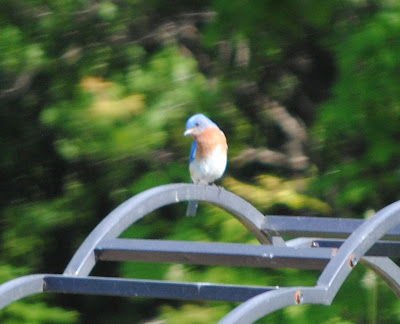 There are of course the usual assortment of bluejays occasionally flying past and shrieking, crows passing, and a few gulls. There are mourning doves and robins nesting – one for the second time under the eave of the cabin. There are virtually always at least one of two turkey vultures soaring overhead.
Posted by The Furry Gnome at 9:42 PM