Bella Kulak and Her Ribbon Skirt

Last December, 10 year old Bella Kulak proudly wore her beautiful ribbon skirt to her school's formal day.  An educational assistant took Bella aside and told her that perhaps she should get a dress more like her (white) classmates.  She was devastated.

Bella (Isabella) is from the Cote First Nation in northern Saskatchewan, but lives and goes to school in nearby Kamsack.  She was proud of her ribbon skirt which was made for her by her aunt.  Ribbon skirts are a symbol of strength, power and womanhood in many First Nations across North America, and for some a symbol of surviving attempted cultural genocide, and often worn for special occasions and ceremonies. 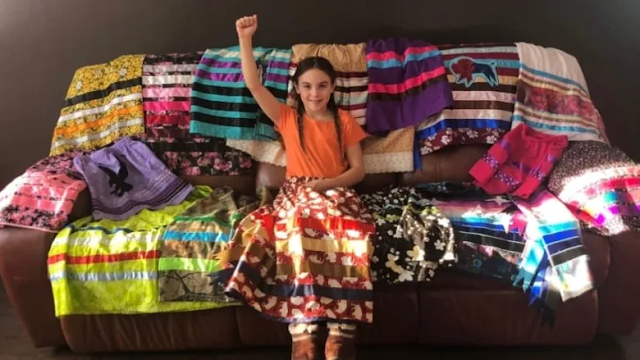 Bella and some of her new collection of ribbon skirts.
Bella's family is not on social media, but her aunt is, and posted about the experience on Facebook.  Soon Bella was receiving ribbon skirts from all over the world, and women were organizing marches, all wearing ribbon skirts, or posting pictures of themselves wearing their ribbon skirts.  When Bella returned to school in January she was escorted by a lot of ribbon skirts - aunts, grandmothers, drummers and the Chief of the Cote First Nation, as well as the principal and vice-principal.  It was the first ever Ribbon Skirt Day at the school.
The school has not only apologized, but has gone further, establishing an Advisory Committee with the Cote First nation, and a bussing service for students who live on the reserve.  They have started inviting First Nation members into the classrooms.  The family, the First Nation and the School have succeeded in turning Bella's experience into a positive step toward reconciliation.
Bella's celebration of her ribbon skirt is a wonderful starting point for Truth and Reconciliation Week here in Canada.  Truth and Reconciliation Week is a five day educational program running from today until Friday, with Orange Shirt Day being the highlight on Thursday.  Anyone can sign on to listen to presentations and discussion - just google Truth and Reconciliation Week.
I'm sure you've all heard the story behind Orange Shirt Day, but if you haven't I'll repeat it on Thursday.  In the wake of 215 unmarked graves being discovered in Kamloops last spring, the federal government made this a federal holiday.  It's not intended as a day off, but as something like Remembrance Day, when we can focus on remembering the children.  It's hoped that it will serve as a catalyst for educational programs in schools.
So whatever else you're doing this week, take a moment on Thursday and remember the children who never came home.  And for a more positive spin on reconciliation, remember Bella Kulak.
*****
P.S. I do have a word on those unidentified flags in the last post.  Thanks to a reader in Tennessee (who grew up in Meaford) and to Patsy, I can tell you that the one on the left is the flag of Grey County with green representing the natural environment with a Trillium, and the blue the water of Georgian Bay with a maple leaf. and the one on the right is the flag of Meaford, with three apples and two sailboats.
Posted by The Furry Gnome at 4:05 PM