The grain and canola crops aren't the only ones around here. The corn and soybeans are coming on strong, though they won't be harvested for some time yet. And the other day I noticed a large field of millet, an unusual crop you don't see often.

Corn has been growing steadily since it was planted in May or early June, and though different fields may vary in getting started (see my post of July 8th), by now they've all caught up. By August the corn is tassling, and by now it's pretty well full grown. Harvest waits until the corn has dried out while still standing, depending on how the farmer intends to store or market it. 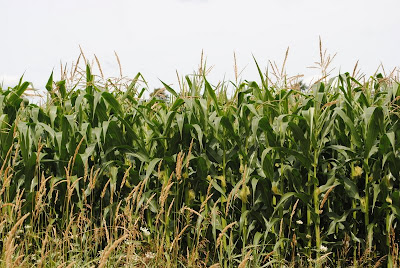 Soybeans are a late crop, that has to wait til after the last spring frost for planting, so it looks like it's just getting started while other crops are growing strong. But by now it's all caught up, and the soy beans have developed, as you can see in the second of the two photos below. At this time of year it starts turning yellow, and will be harvested in a few weeks. Along with canola, it is the other oilseed crop. 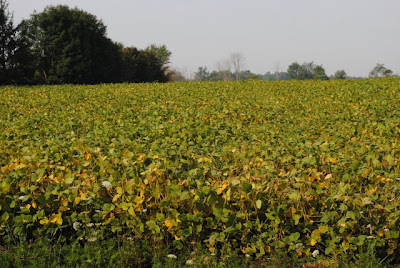 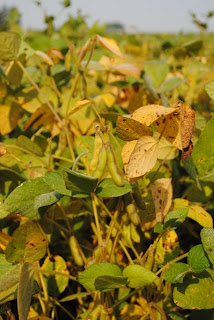 Millet is not often seen in most of southern Ontario, but this field is growing a short ways north of our place. Earlier in the year you couldn't tell it from other grain crops easily, but by this time of year it has quite a distinctive appearance. It has tiny seeds, held in these wavy fronds (which were blowing in the breeze when I took these pictures). Some seed heads turn from yellowy green to reddish brown earlier than others, leaving the field with a mottled appearance of green and brown as it matures. It will eventually be harvested like other grains. 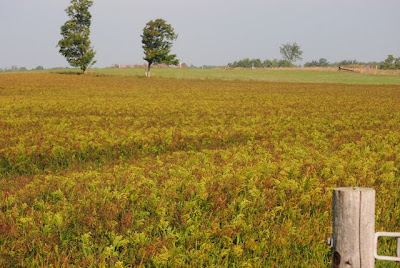