They're not nearly as common as wheat fields, but there are a fair number of farmers growing oats and barley around here - sometimes just oats or barley in a field, and sometimes mixed together, known as 'mixed grain. This field shows the mixture, much earlier in the summer, in early July, when the oats gave the field a bit of a blue-green colour and the barley provided a soft, feathery appearance. 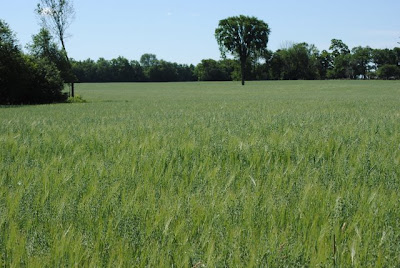 A close-up shows the difference, the oats being the large individual seeds openly spaced on the top of the stalk, and the barley being much more like wheat, but with long feathery 'tails' or 'glumes' extending upward from the grain stalk. There's an out-of-place stalk of timothy in the upper left hand corner, a common component of hayfields. 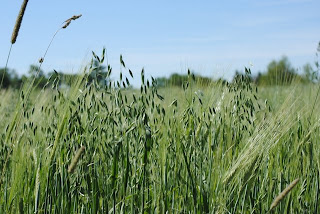 The pictures below show a beautiful field of barley, more recently, a few weeks before combining. The fronds of the barley give the field a wavy, feathery appearance, especially in a gentle breeze. The barley turns golden-brown when ready for harvest, just like wheat, and the harvest is similar, with the grain combined first, then the straw baled, mostly for use as bedding for cattle. The second photo shows a combine harvesting a mixed grain field. 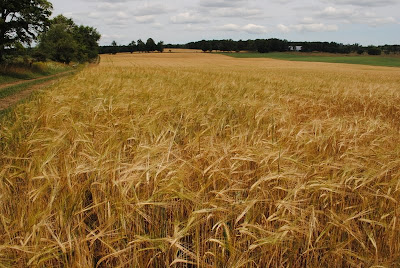 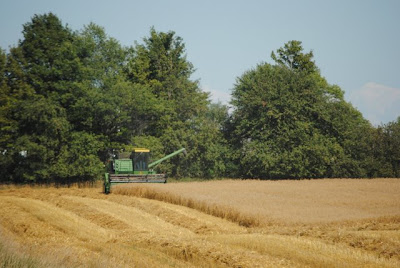 A close-up of barley, showing the grain as well as the long feathery 'glumes', already starting to turn gold, and a close-up of oats earlier in the summer, showing the clearly visible separate grains. 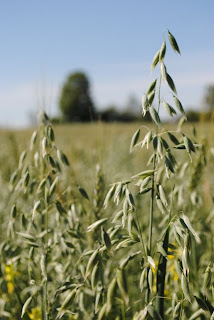 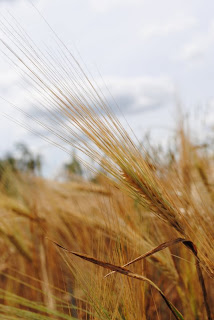