It's been snowing for three days now, and it's just starting to abate. First there was the passing storm on Sunday which snowed everyone in completely by itself, but then on Monday the winds switched to the north and the lake effect snow started, piling on more white stuff. On Monday it mostly missed us, though it still snowed nearly another foot, but today it was headed straight in our direction and this morning snowed 8 inches in 3 hours. 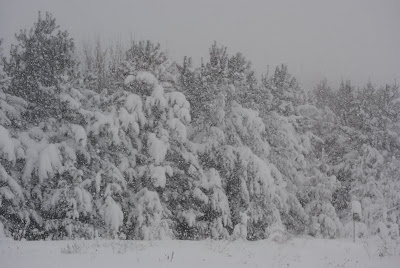 At the Height of the Storm

Obviously you need to be prepared for a storm like this, with snowblower and shovel ready, gas in the car, and enough provisions for several days if you can't get to a store. I think we were this time, and the snowblower has worked well - except that it just keeps snowing and piling up deeper and deeper.

We got a 'snow rake' on a 15 foot extendable pole, so I can pull the snow off the roof where it drifts 3 feet deep on the lee side. It works like a charm - well maybe it's a little awkward - and there's now a pile four feet deep on the deck, even though we keep shovelling a path from the doors.

Getting completely snowed in like this is a new experience for us - but I'm sure not for others around here. Though it causes lots of problems for many, and the local town is largely closed down, for many others it's a time to just stay home, keep on shovelling and enjoy the peace and quiet. The plows are concentrating on the main roads, and have only been down our road once or twice, while the snow is 2 feet deep on the level. But the storm is abating now as the streamers off Georgian Bay angle more to the east. By tomorrow it will be back to normal winter weather. 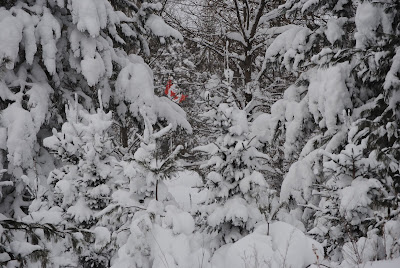 The Neighbour's Flag through the Trees
Posted by The Furry Gnome at 3:27 PM