I'm pleased to bring you my first (and hopefully only) shed roof weather report, based on the two shed rooftops that sit in my immediate line of vision out the window.  You can tell how desperate I am for a blog post topic!  It at least illustrates how changeable the weather here in Grey County is in February!

There are two sheds shown in all the pairs of photos below, the first is our own, and the second is our neighbour's, though it's in the back corner of their lot, so it's right outside our window.  Note also that 'our own shed, the greener one, has a 45° roofline, which provides a bunch of storage space up under the roof, but creates a different angle for the sun hitting the shed roof.

Both sheds are oriented differently as well.  The roof on our own is close to a right-angle from the mid-day winter sun, but the neighbour's is at a low angle, and only in late afternoon,  Although both shed doors are facing southeast, the rooftop on our shed also faces southeast while that on our neighbour's faces southwest.  Figure all that out if you can! 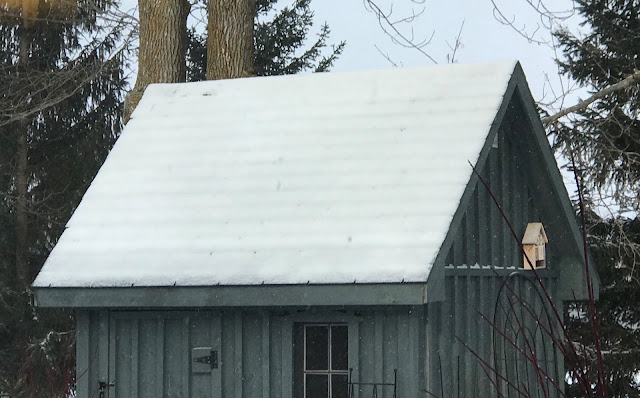 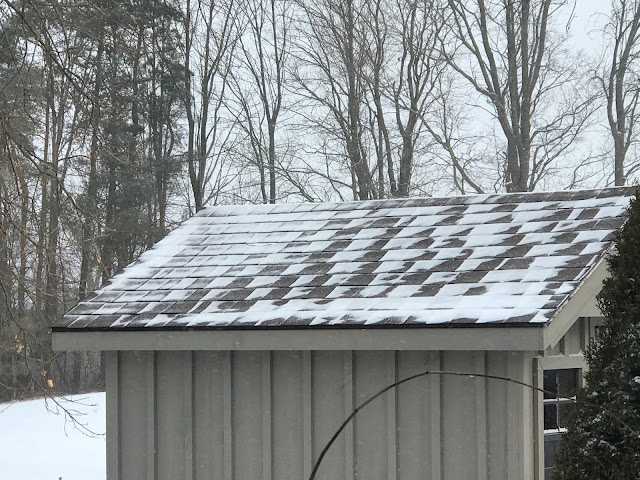 Starting on Feb. 12th, we certainly had winter weather here, as you can see.  And it was quite windy that day, the direction of the wind showing up in the pattern on the neighbour's shed roof. 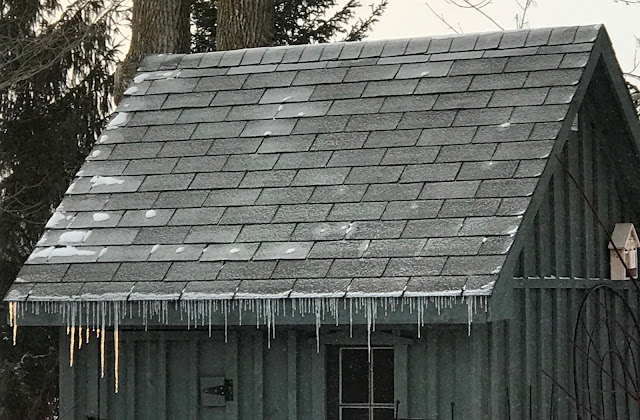 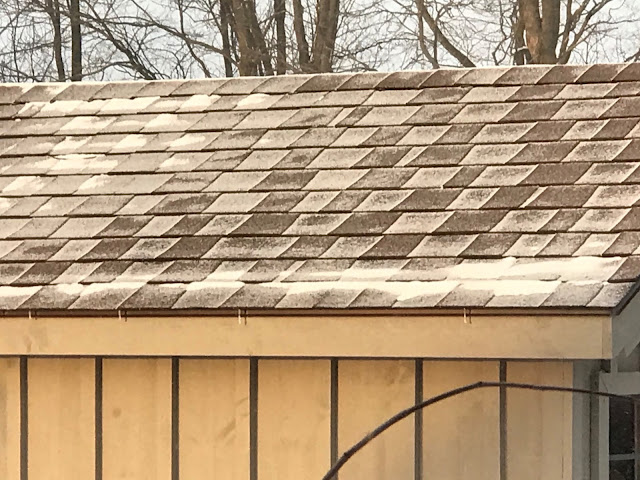 By 5 o'clock the sun had melted most of the snow on our shed roof, but not on our neighbour's.  The light-coloured icicles on the left of our shed were lit up in the late afternoon sun. 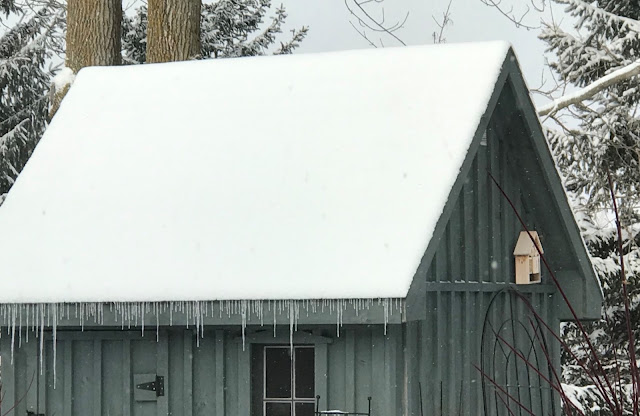 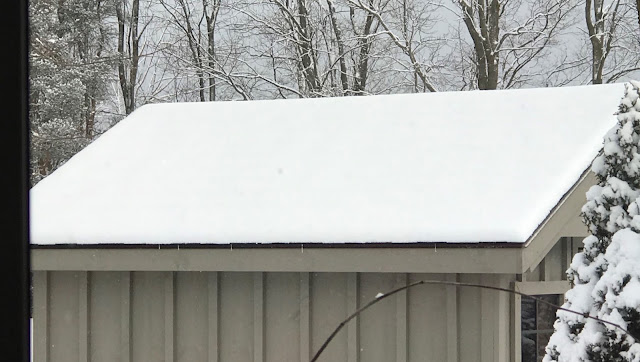 You can't say much about the weather on the morning of Valentine's Day, just snow on both rooftops. 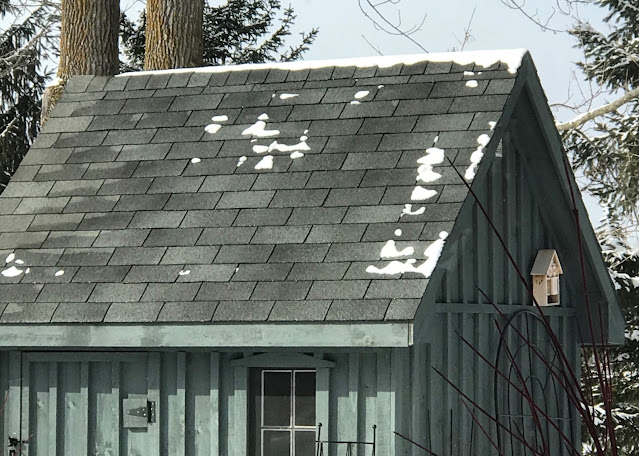 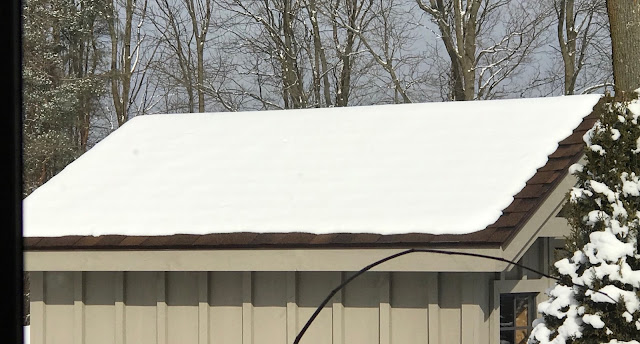 But by 5 o'clock that afternoon the sun had conquered our roof, and melted the edges around our neighbour's.  The different angle of the sheds and their rooftops made the difference.  The sun was shining nicely that day. 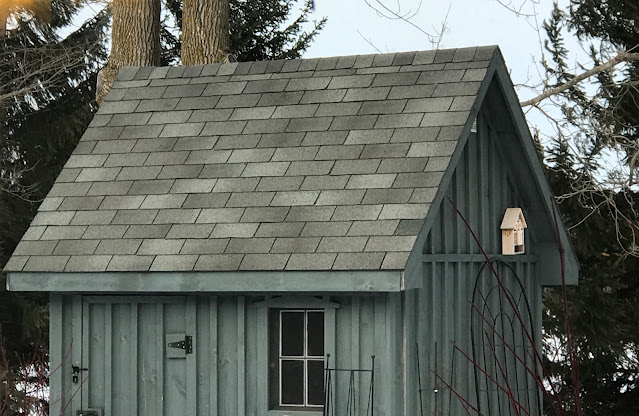 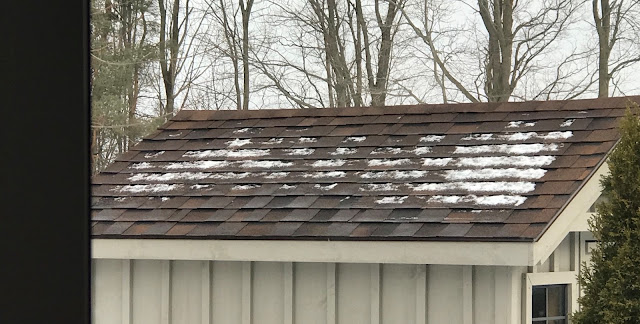 A few days later we had an almost snow-free rooftop day, just a little on the neighbor's.  There was certainly lots of snow on the ground still though! 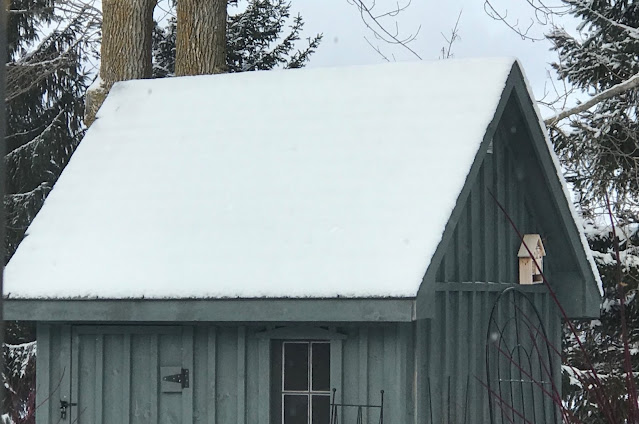 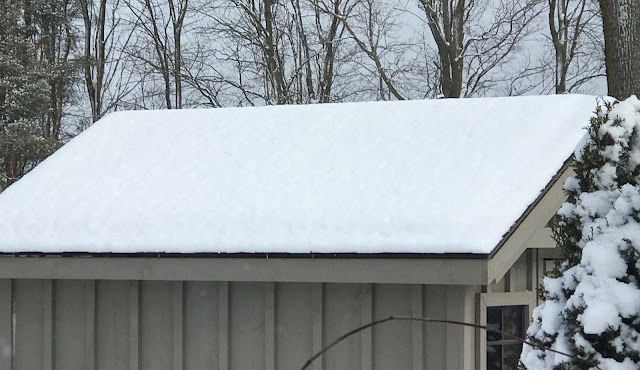 But a few days later winter was back - that's what it's been like this February. 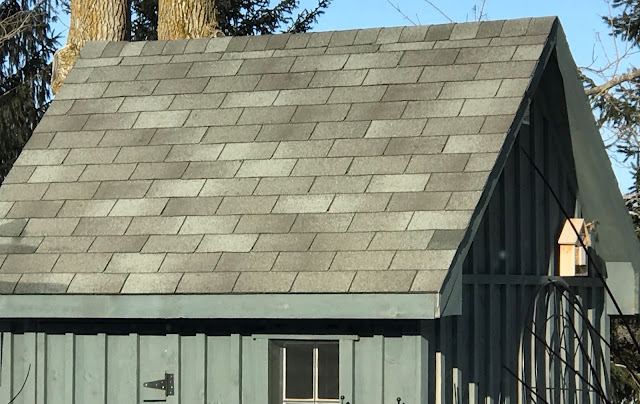 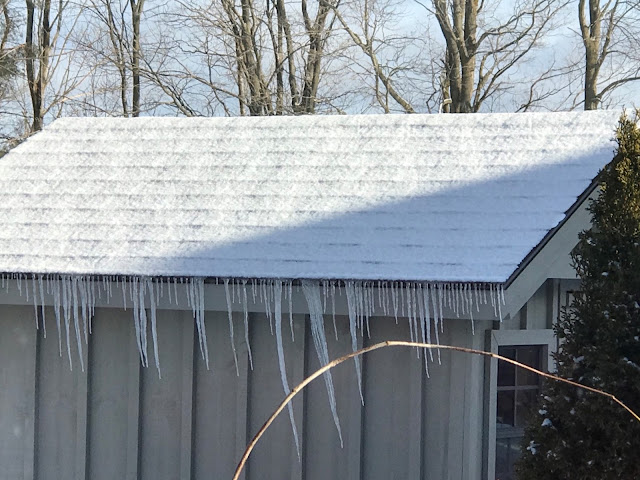 The difference that afternoon was striking, showing the difference in the angle of the two sheds to the sun.  On the neighbour's shed it wasn't warm enough to melt the snow, but it was warm enough to form icicles.  And how do you suppose those icicles develop a curve as they grow?  Is the prevailing wind enough to do that? 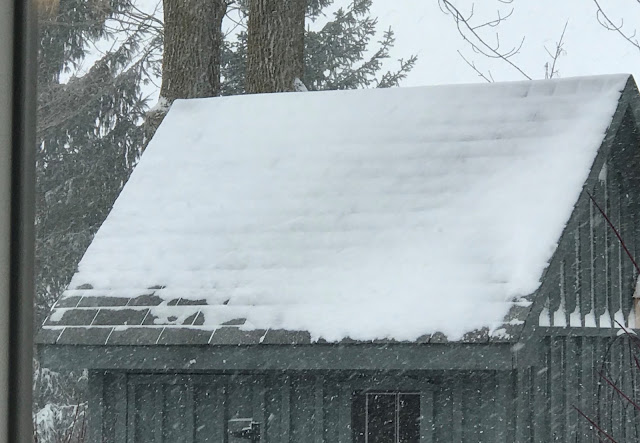 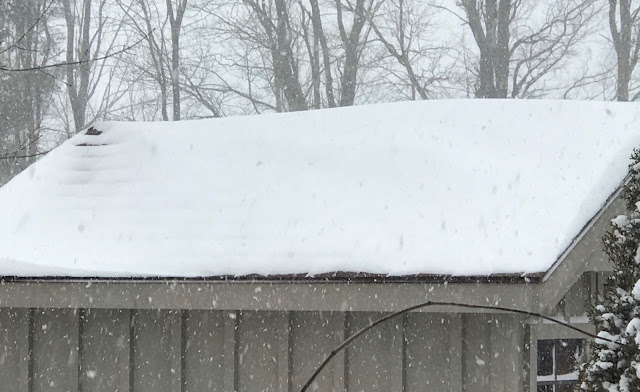 And I refuse to comment further on our shed rooftops yesterday, after our most recent dump of snow!  They were both supposed to be bare by now!
Looking ahead at the long term 14 day forecast is at least a little encouraging.  While the coming week features temperatures only as high as freezing during the day, and down to -16°C at night, temperatures the following week drop only to -6° at night and stay at or close to freezing during the day.  However, sunshine can moderate those forecasts, as we all know.  Daytime sunshine can easily push temperatures above those forecast, while melting snow on driveways, rooftops and roads.  Here's hoping.  Certainly the norm in early March here would be an increase in sunny days.