I told myself I could afford half a day away from gardening, so on the spur of the moment I headed out with a paddling buddy to paddle Lake Eugenia, not the open lake but the stump-filled and marshy southern reaches where the Beaver River enters the lake. 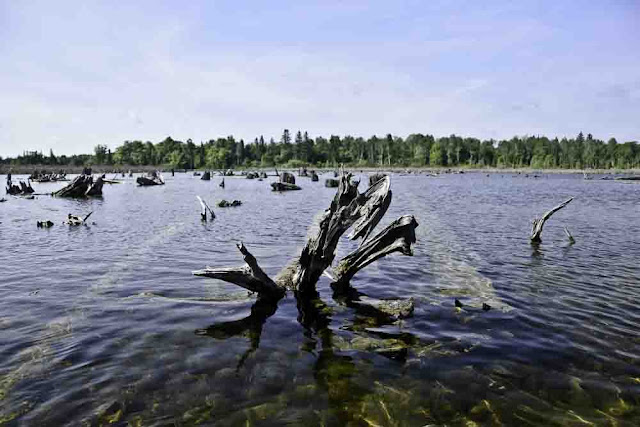 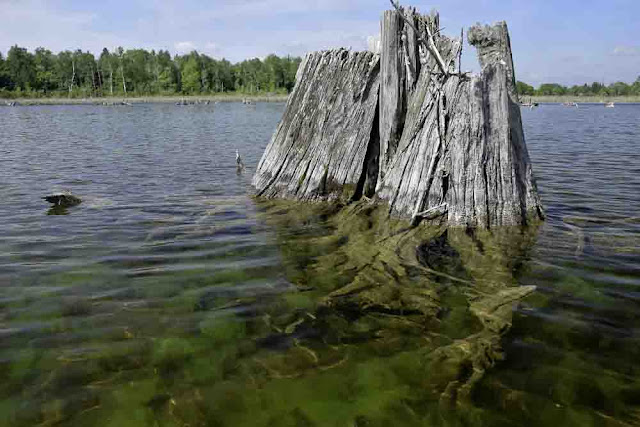 Lake Eugenia is an artificial lake, created by what is now Ontario Hydro, in 1914 when the Beaver River was dammed to generate electricity and the Eugenia Power Plant began its life.   Quite a few farms were purchased by the government, and flooded, but in parts of the lake, the trees were simply cut down, leaving stumps.  So in the upper shallow end of the lake the stumps all stick out of the water.  Makes for some tricky paddling. 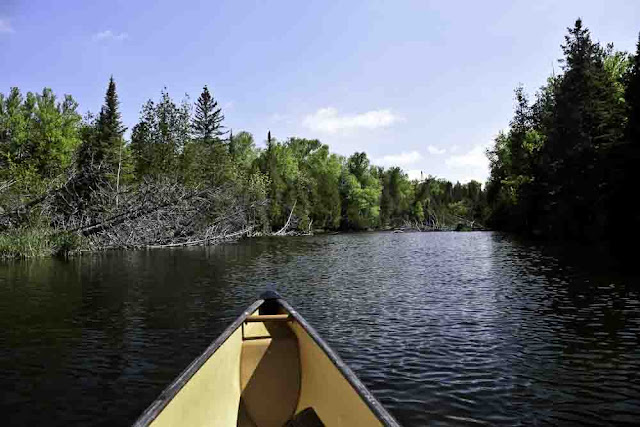 We paddled through that, and headed up the channel of the Beaver River, though it`s flooded quite a bit deeper than it was originally.  I was in my little `single`canoe, which I love paddling to explore places like this. 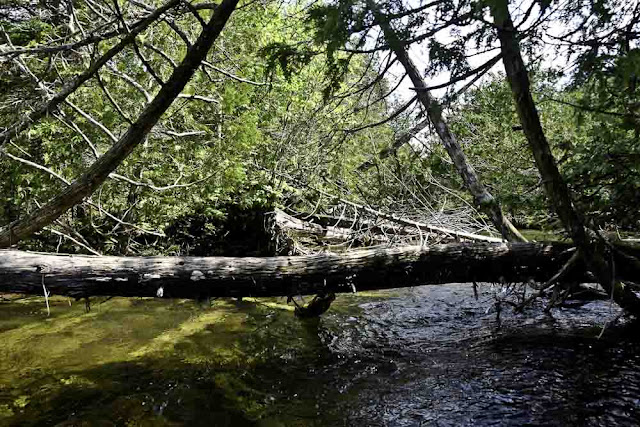 We went as far as we could, but eventually the way is blocked by fallen trees.  This is where the flooded portion of the river ends, and you begin to have to paddle against a current, a fairly serious current.  And as we got in among the trees the bugs found us of course. 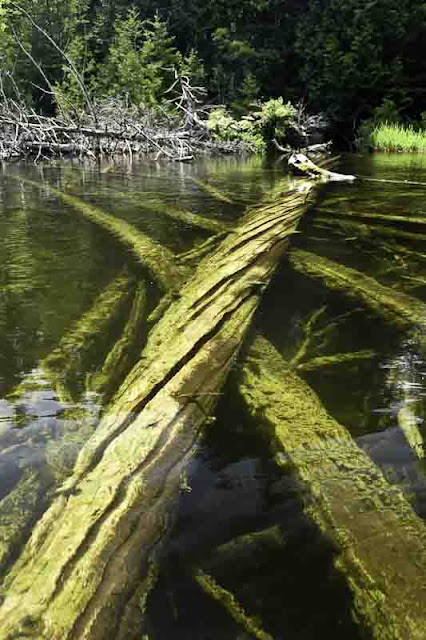 We were paddling across lots of logs in the water beneath us.  This one crossed the entire river, so if the water level dropped far it would be a barrier. 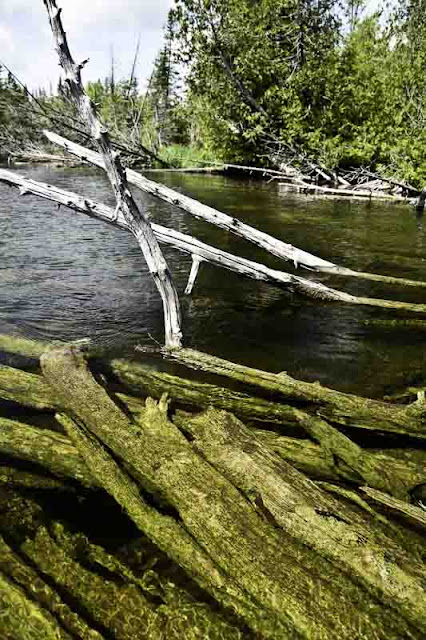 The logs look so clear under the water, sometimes it`s hard to believe that you can paddle right across them. 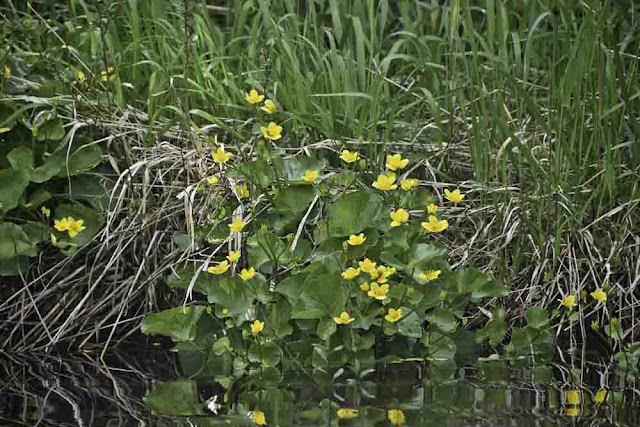 In several places there were Marsh Marigold tumbling over the banks, their bright yellow flowers reflected in the water. 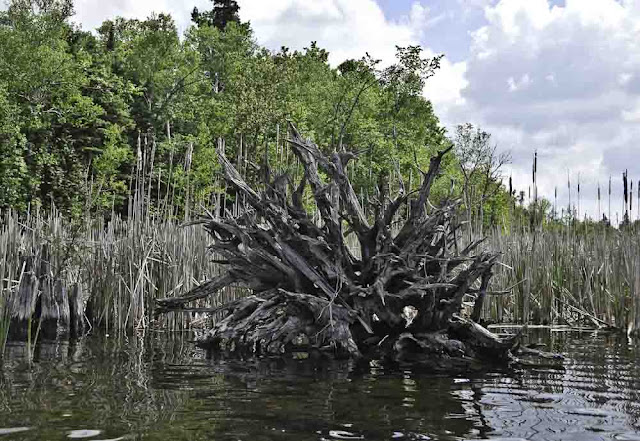 Another big stump as we paddled down out into the lake again.  Those circles of roots are under all the stumps, under the water, but this big one had obviously fallen over (or been pushed by winter ice). 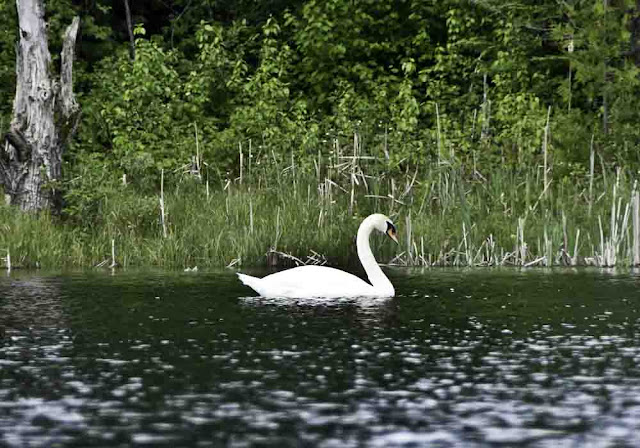 There`s a pair of swans nesting in the area, and we saw one adult Mute Swan (see its orange beak).  It never moved far so I suspect it was guarding its mate on a nest in the reeds.  We stayed well away. 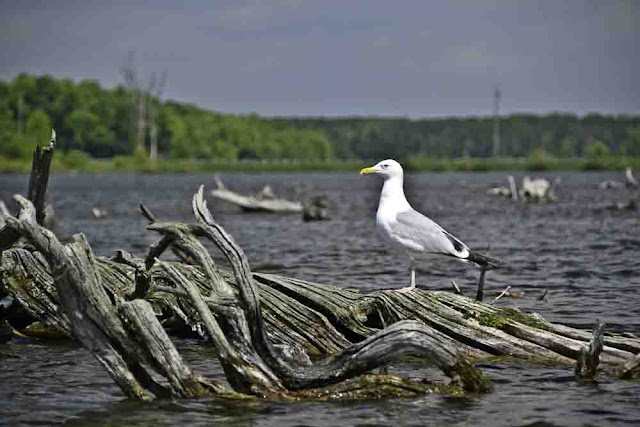 We also saw a very large gull, just sitting on one of the stumps.  No appearances of a nest nearby, but it stayed still while I got remarkably close as I paddled by.  This view is uncropped. 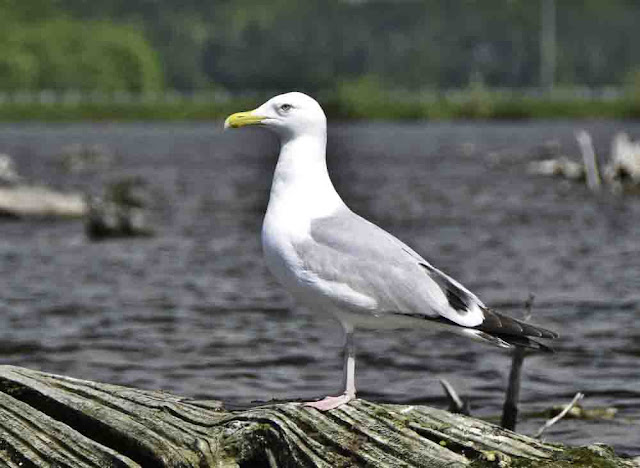 I double-checked and it`s a Herring Gull.  In this cropped version, you can see the red spot on its bill.  It also has those the black-tipped grey wings, and  flesh-coloured legs.