Lots of little things happen as the seasons pass, and November is no exception. The red squirrels have been busy in the old apple trees along the fencerow, stashing apples in the crotches of the branches, presumably to keep them high and dry for later. Who knows if they actually return and eat them!

Elsewhere I've seen squirrels do the same thing with mushrooms - creating a mushroom tree, decorated with white mushrooms drying in the open air.


At the same time, November is a major time of seed dispersal. Returning from a walk you (and the dog) are decorated with burrs of several different kinds; even the tiny goldenrod seeds stick to your clothes briefly to get carried away from the parent plant.
But milkweed seeds are the most obvious, bursting out of the cocoons that have held them, and blowing away in the wind. Each small round brown seed is held aloft for awhile by a white parachute of silk. . 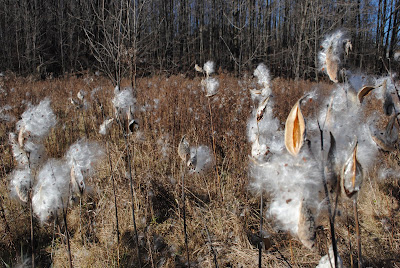 Mysteriously, I've noticed that different patches of milkweed seem to disperse their seeds at different times, even though all the plants in any one patch release their seeds at the same time. A patch near our garage was exploding in tiny white parachutes in September, but a patch 100 yards away just released its seeds now.
Posted by The Furry Gnome at 10:29 AM